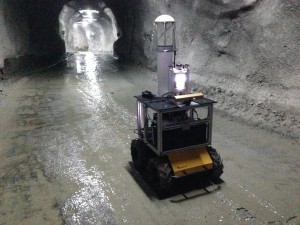 The robot during a data-collecting traverse

Located within the slopes of a volcano approximately 100 km south of Santiago, Chile, is the largest underground copper mine in the world. Special permission was granted for entering an active section of the mine to collect a robotic dataset through a 2 km traverse. The dataset is free and publicly accessible.

This dataset is useful for the preliminary development and evaluation of autonomous vehicles for mine inspection, as well as smart mining and material exploitation. From a more general robotic navigation and mapping perspective, this dataset is useful for the validation and benchmarking of sensor fusion and SLAM systems in a realistic environment with variable illumination and surface properties. This dataset could also be used for studying continuous time estimation methods. Streams of information from individual sensors can be used independently to evaluate different types of algorithms such as visual odometry and point cloud registration.