The Clearpath Robotics Husky A200 robotic platform was used for collecting the dataset. It carried a computer for data logging and controlling the robot, a radar server computer, a stereo camera, a survey-grade 3D lidar, a 2D radar, and batteries for powering the above equipment. The Husky is a skid-steer robot, and was manually driven through a wireless controller during dataset collection.

A Point Grey Bumblebee XB3 camera was mounted near the front of the robot. The wider 24 cm baseline was used. Images were captured at a resolution of 1280 x 960 pixels and at a rate of 16 Hz.

A Riegl VZ-400 survey-grade 3D lidar was mounted near the center of the robot. This sensor has a quoted range limit of 350m, with a range accuracy of 5 mm. The generated point cloud contains both positional and reflectance information. Two scanning modes were used with this sensor. When the Husky A200 was stationary, high resolution point clouds were recorded at vertical and horizontal resolutions of 0.04 degrees, at a rate of 1 scan per 152.5 seconds. While traversing, the sensor continuously rotated to produce scans at a higher frequency of one scan per six seconds, and at vertical and horizontal resolutions of 1 degree.

A frequency-modulated continuous-wave (94 GHz) radar from Acumine was mounted at the rear of the robot. The sensor was operated in a continuous scanning mode where the swashplate rotated at 1 Hz, with a radar sample rate of 435 Hz. Power return values were recorded every 0.5 m up to an operational range of 200 m, and at angular resolutions of 0.68 degrees. The antenna beam width is 1.5 degrees, and the beam is capable of penetrating small dust particles due to its relatively longer wavelength in comparison to the lidar. The data output of this sensor is a dense 2D scan in the shape of a disc.

Encoder readings from both the left and right wheels of the robot were recorded at 10 Hz. 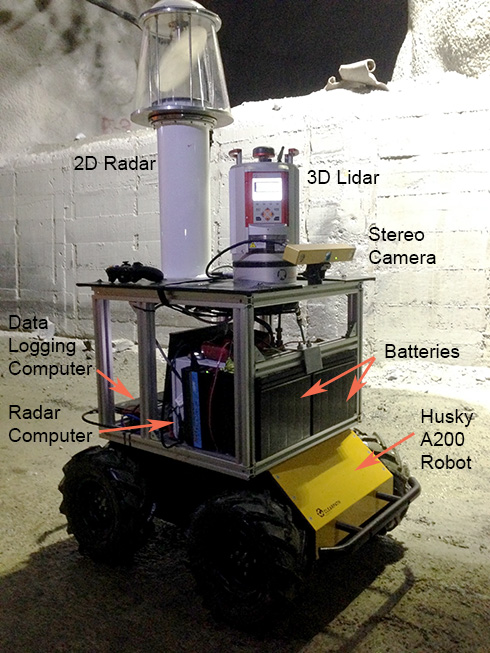